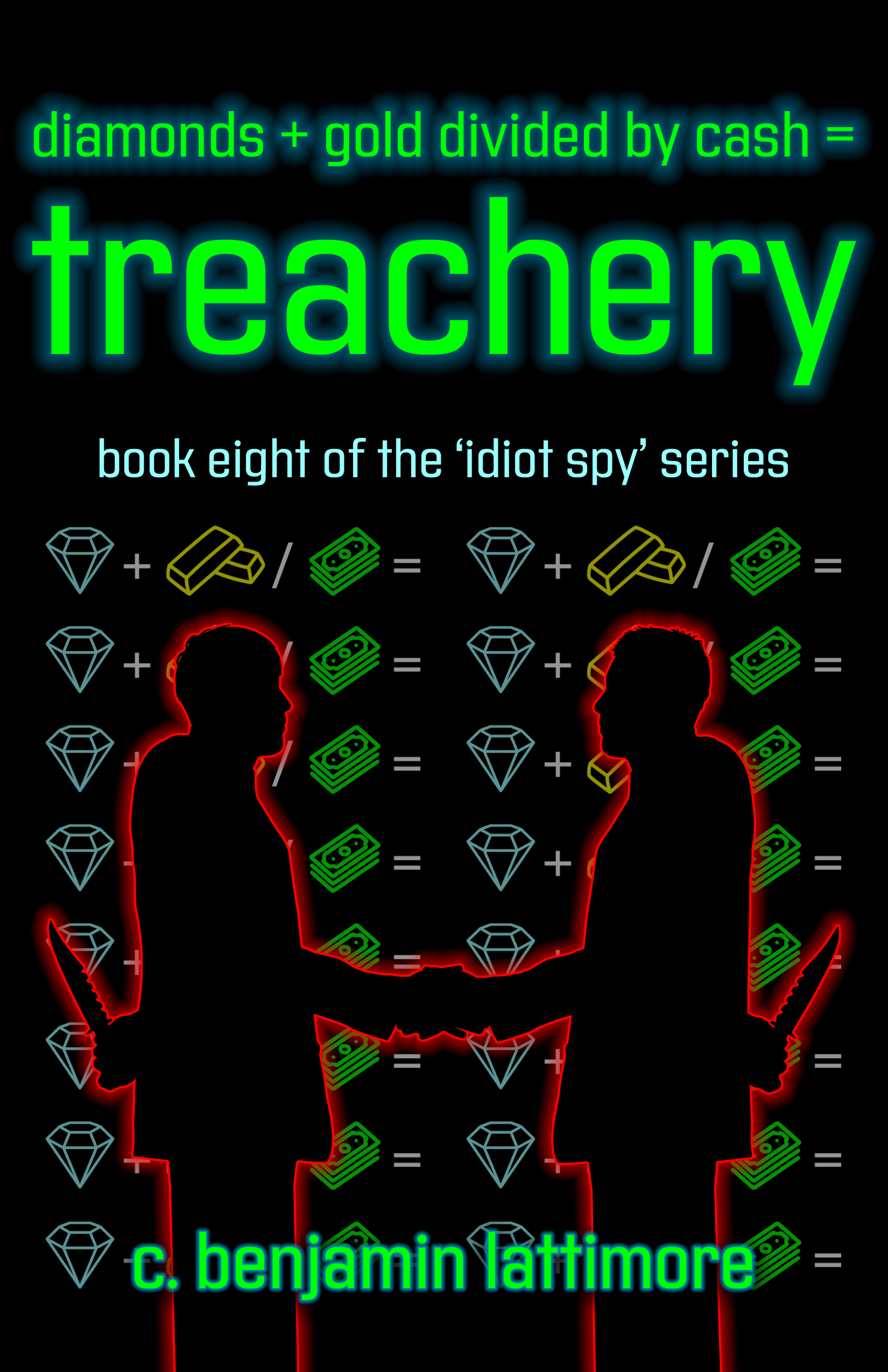 In book number 8 of the series, the group continues to expand as a result of the single men earnestly seeking meaningful relationships.  A few of the guys find unadulterated love and passion, and others find abject betrayal.  The group plays a significant role in managing, monitoring, securing, and organizing the diamond and gold mines discovered on historically Aboriginal land and designated as such after a series of long court battles.  This soon makes all Aboriginal people in Australia rich.  As word spreads around the world that a bunch of Aboriginal people own the rights to land that has diamonds lying around for the picking, unsavory characters start looking for an easy payday to arrive.  Through legal manipulations, intimidation, beatings and murder, group after group make this one-way venture to take what belongs to the Aboriginal people.  Ben Beckmire’s group won’t accept any of those machinations and, therefore, as a result of their mindset—the number of bodies waiting on them in Hades grows incrementally.  Diamonds, plus gold, divided by cash truly equals treachery. 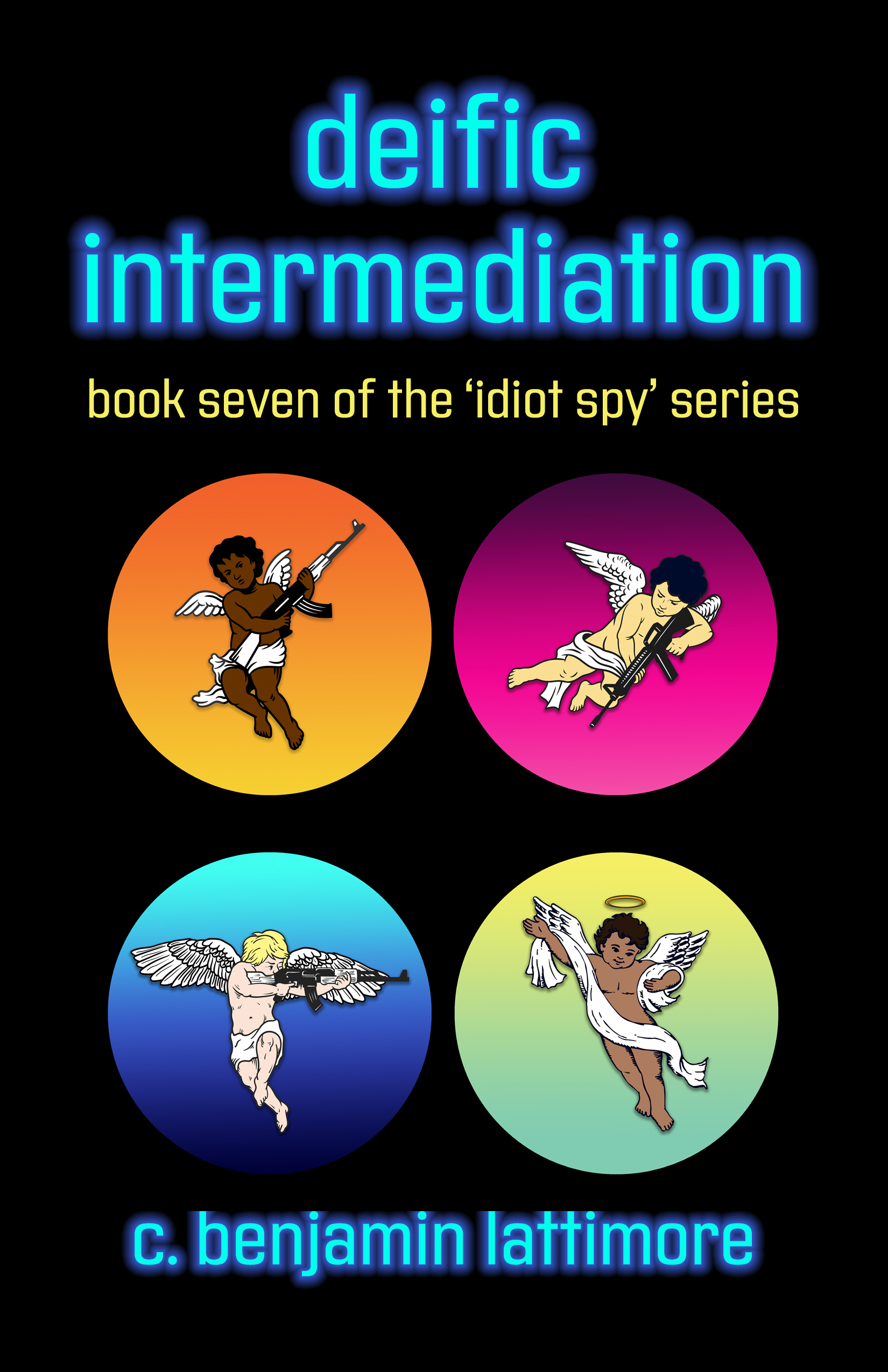 In book number 7 of the ‘idiot spy’ series, there is the usual—good news and bad news!  The good news is that there would be no further legal actions to surreptitiously defraud the Aborigines of lands that are rich in natural resources.  The bad news is that the group remains in danger because of the Carbon Factor formula and the Sarge’s cousin, Walter.  Walter is the source of evil that is attempting to annihilate everyone allied with the Sarge.  Only divine intervention can help the group.  The choices for consideration are epic in that there is no good resolution—should they sell the formula to a country that hates America for billons, and subsequently be without a country—or turn it over to their government and politicians and watch the creation of another weapon in its arsenal to wage wars? Or perhaps they should attempt to destroy the very essence of the formula, publicly, once again!  No matter the selection; many will die but new alliances will be formed. 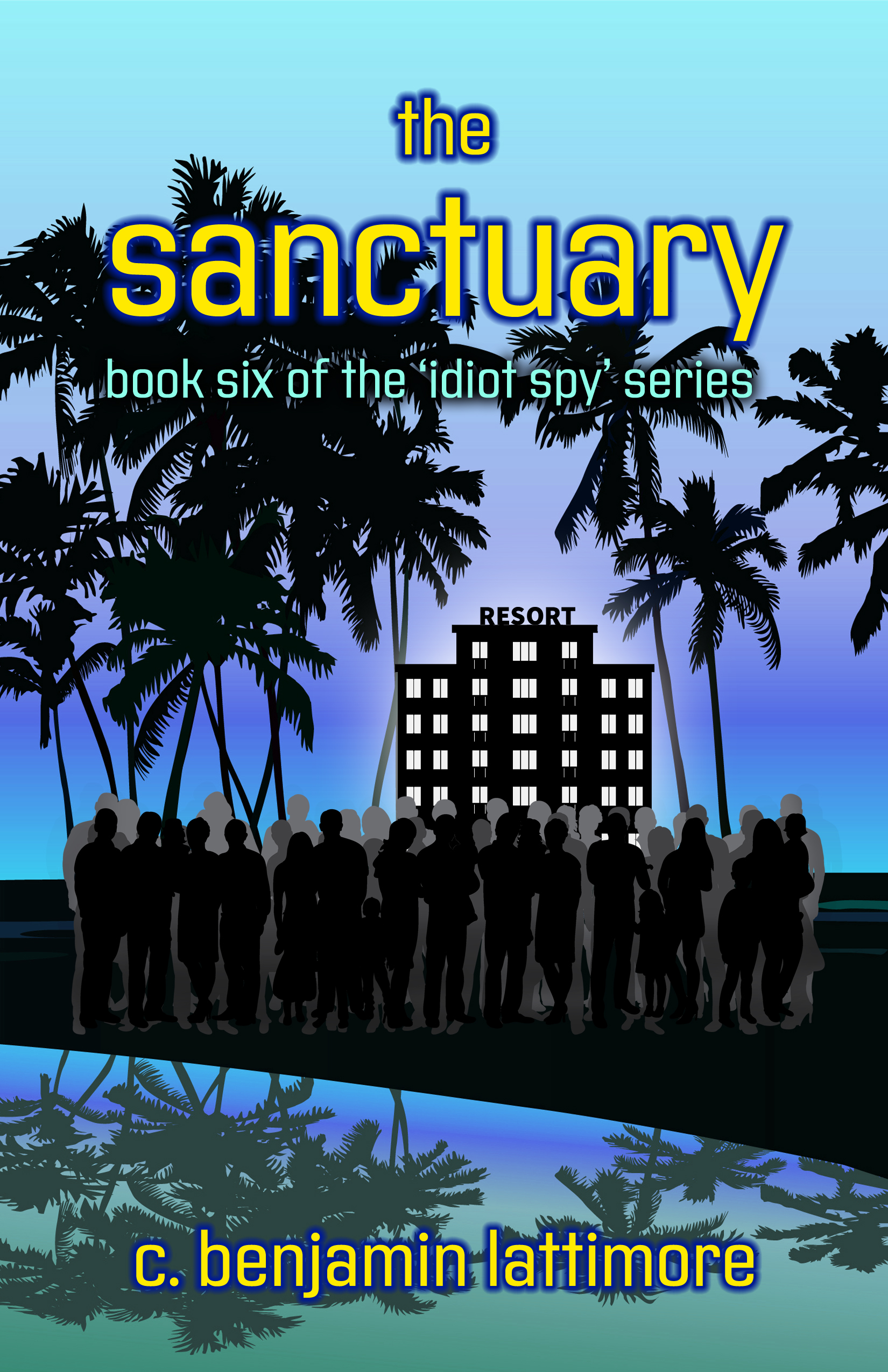 In book number 6 of the ‘idiot spy’ series, the group travels to Valencia, Spain to investigate rumors that the ‘idiot spy’ had fathered a child that is being kept in a convent.  The group encounters a want-to-be gangster who watched two opposing gangs destroy each other.  He takes advantage of the moment, and by default, becomes the new mob boss.  The boss, much like Ben Beckmire, is a silver-tongued rogue.  He is easily dominated by Beckmire in his illegally acquired restaurant.  Through détente, amazingly, he becomes the key to answering the question about the whereabouts of the alleged child.  The mobster becomes an ally, and, eventually, is instrumental in helping the group pull off capers. Two sitting and crooked US Senators die trying to surreptitiously annihilate the group.  The Sanctuary—the group’s place for rest, relaxation, communion, and healing, is seemingly off-limits to mayhem, but acceptable to love, passion, and friendship. 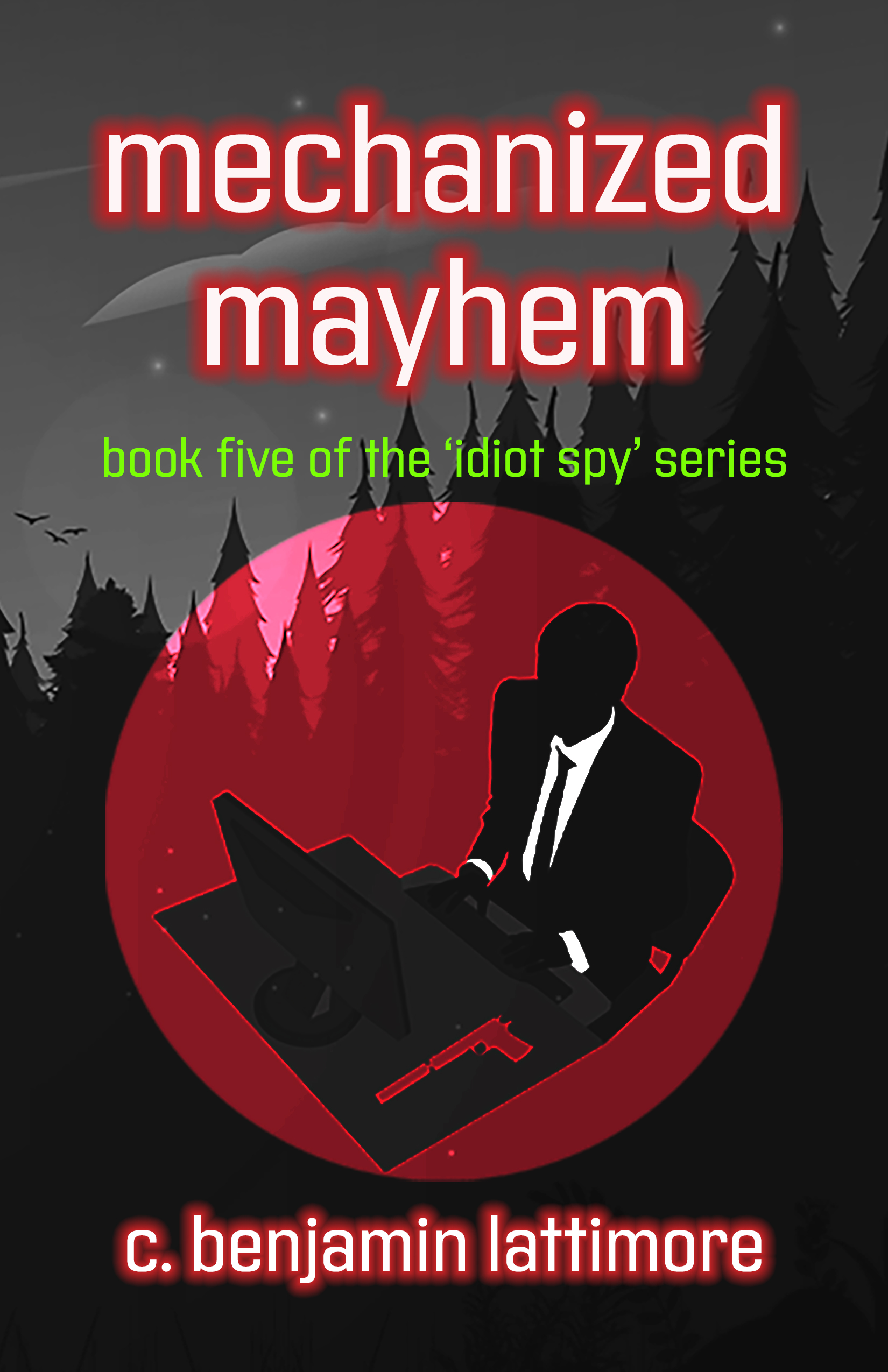 In book number 5 of the ‘idiot spy’ series, mayhem becomes the operative word of the group as they continue to witness the wrath of their enemies, both foreign and domestic.  In this book, a former adversary, now a valuable informant, is murdered at one of the group’s getaways, for reasons unrelated to the Carbon Factor formula.  As usual, the group is under extreme pressure to turn over the remaining aspects of the Carbon Factor formula or suffer the consequences.  Money continues to flow into their coffers from a lack of payment to those who were unsuccessful in terminating them.  New additions to the group occur—death still plagues and pursues them—the former extractionist delivers a baby boy in the mysterious outback.  And, the stork continues to fly to another awfully familiar place.  A distant family member is appointed to upgrade their defenses.  The resultant changes yield a weapons system of apocalyptic proportions—mechanized mayhem! 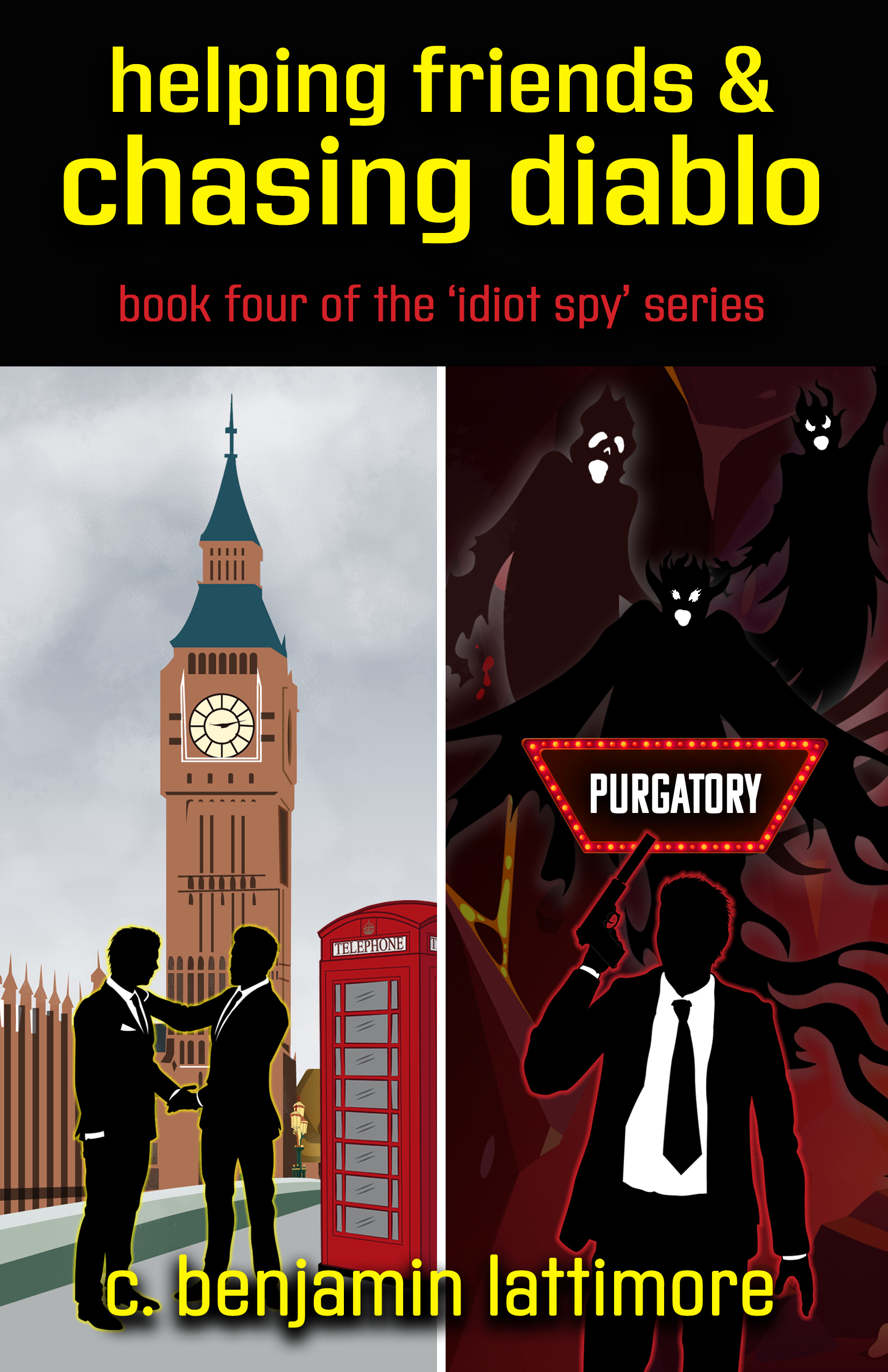 In book four of the ‘idiot spy’ series, the adventure continues as the group expands and travels overseas to help the new members of its team combat threats to their nation, their families, and possibly humanity itself. What was initially a convenient opportunity to avoid an impending battle by leaving the country becomes a tactical decision necessary to escape Walter, aka Diablo, who vowed to stop at nothing short of the group’s complete annihilation. Under the stalwart leadership of Benjamin “The Sarge” Beckmire, the group must once again band together to protect the Carbon Factor and each other, all while being stalked by an international caucus of assassins, terrorists, and crooked politicians. The squad must deftly evade their enemies—foes who are happy to conclude the existence of old Vietnam vets and their families for a lucrative payday—while reminding them that collecting that ransom has been a reward that few have enjoyed. 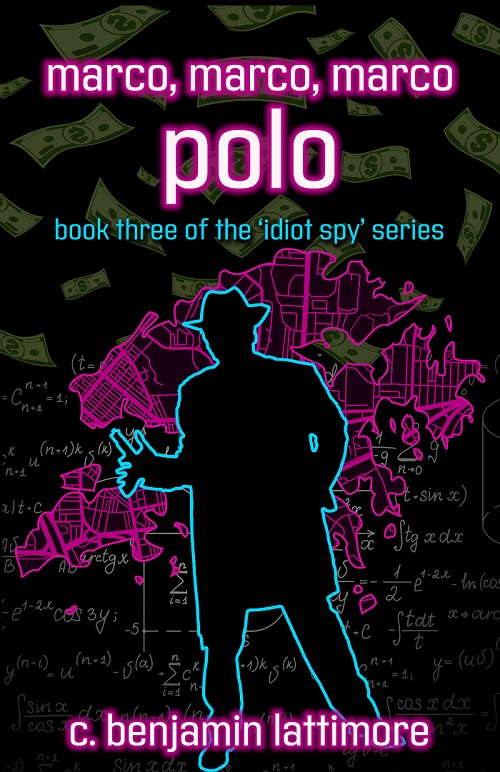 In book three of the ‘idiot spy’ series, the landscape changes, the intensity of conflict exponentially increases, and the body count continues to proliferate.  The group ventures far, far away from the sanctuaries of their farm, hotel, and, ranch to places where the language is different but the quest for the Carbon Factor remains the same.  Key components thought to be informational in the search for the Carbon Factor turn out to be a guise.  The real information was left in a wallet in St. Moritz, and was unwittingly returned to its owner.

The ‘idiot spy’ is hospitalized, and unbelievable information is gathered from his body which was used as a message board.  As the team believes it is closer to solving the mystery of the Carbon Factor, foreign nationals arrive on the scene with the intent of delivering a lethal and bloody message to the group and members of their families for disrupting a drug scheme in Los Angeles.  Agents from another country intervene and members of the team begin to show dedicated interest in this new cast of characters. It will be a glorious day for the group when the factual or fictional formula is in their hands—or not! 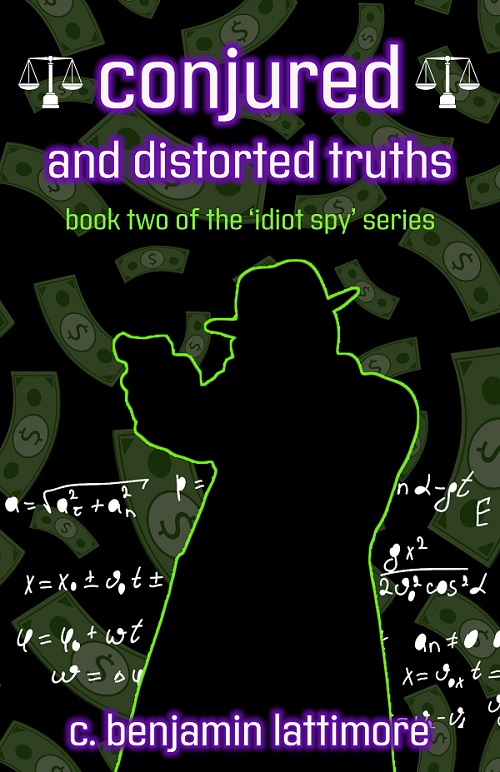 In book two, confrontations continue at every turn emanating from Zanthius swallowing a capsule that allegedly contained information about a dirty bomb.  The group is hunted by mercs, double-crossed by a family member, and a loved one is dastardly dispatched of.  Their leader sanctions an unspeakable and horrific death for a nemesis.  The group’s Virginia hideout is obliterated.  They venture to a ranch in the Midwest where they root out carpetbaggers preying on ranchers. They begin to prepare for imminent attacks!

The group encounters low-level government employees who freely operate clandestine programs, without checks and balances. They interrupt a so-called détente meeting about an island in the Pacific, but it is actually a drug deal. They recover millions of dollars in payments intended for mercs.  The capsule is retrieved and surrendered to devious government officials.  Inadvertently, important property is returned to Zanthius that is fundamental to locating the formula. 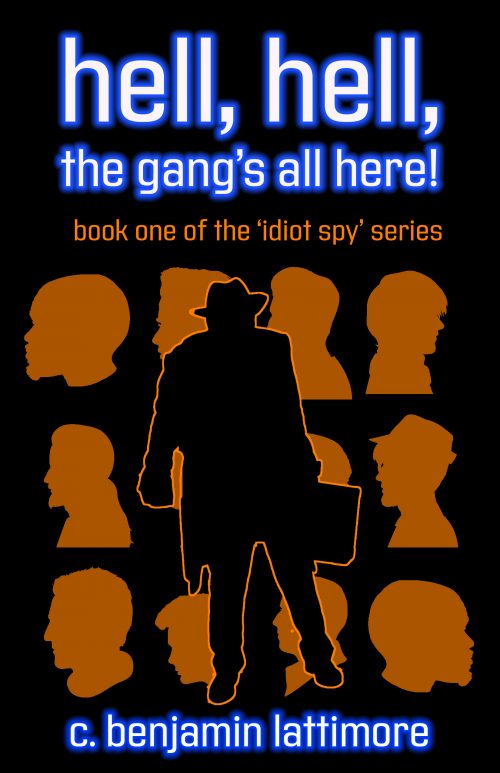 hell, hell, the gang’s all here!

the ‘idiot spy’ series
book one of ten

This story features an unlikely protagonist, Zanthius De Lombardo—a womanizing, self-absorbed, inconsiderate screwup.  After a failed marriage and a suicidal bout with alcoholism, he becomes the HR director for a government-run energy company.  He expects nothing more than watercooler gossip and an occasional office romance.  Instead, Zanthius discovers that the business trip he is sent on is a one-way journey, and that the company is a front for a consortium of off-book assassins and spies.

Zanthius is caught up in a world of international espionage as governments race to acquire the secret formula for a powerful, cheap dirty bomb.  Zanthius’s once lackluster life is suddenly filled with spies, unscrupulous politicians, terrorists, secret societies, mercenaries, and the threat of death.  His mother reveals information about his father, who, along with eleven of his friends, comes to his rescue. Little by little, the ‘idiot spy’ becomes the man he is meant to be. But is it enough to save the world?